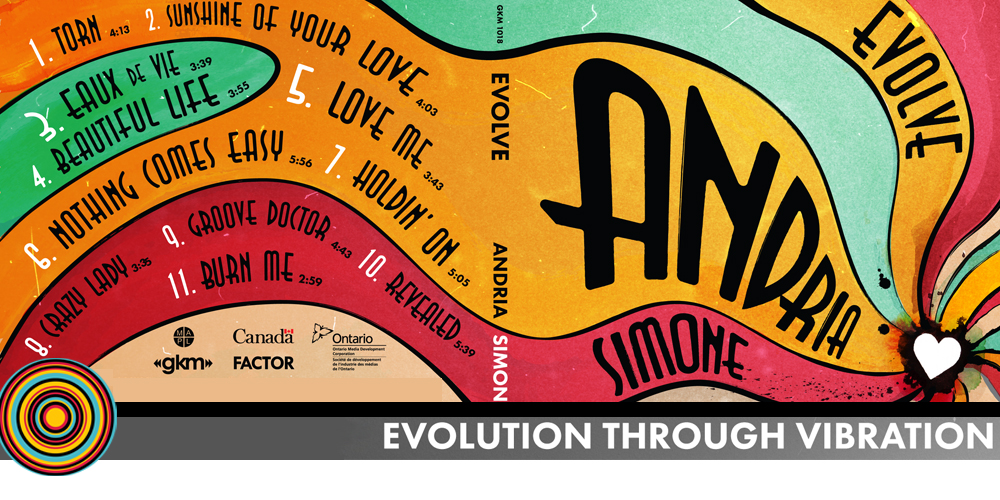 The title of the second album from Andria Simone says it all: Evolve (Evolution Through Vibration). This totally compelling and accomplished record maps the musical and personal evolution of Simone, a young singer, songwriter and bandleader of truly breathtaking talent and charisma.

Released on GKM in March 2015, it comes less than 18 months after the release of Andria’s debut full-length album, Nothing Comes Easy. That record turned heads and ears, scoring impressive airplay on CBC radio, JAZZFM, Proud FM, college radio, and blues programs across the country. Above all else, it alerted the Canadian music industry to the presence of a new artist with unbridled potential. That promise is now fully realized on Evolve (Evolution Through Vibration), a work that showcases Simone at the very top of her game.

It represents a quantum leap forward from the first record, something the producer of both records, Greg Kavanagh, is quick to confirm. A highly-regarded producer/songwriter/instrumentalist, he has been in the business a long time. “I have been working with Andria Simone for three years now and I have not seen growth in an artist like this ever,” Greg explains. “As we started on CD number two, Andria had definite ideas as to how to proceed and what she wanted. I listened to all her thoughts and figured out how to help make them happen. This CD is a collaboration between artist and producer in the true sense of the word and I loved every minute of it.”

Andria praises Kavanagh’s ability to “take my emotions and put them into musical form. Our co-writing process will start with me writing a poem or getting my feelings down on paper. I’ll tell Greg about something that’s been influencing me musically, and we go from there. I’ll work on my vocal and the melody and lyrics come really quickly. Greg then takes more time with it and I’ll take a demo skeleton of an idea to my band in rehearsal. The boys then add their flavours and we perform the song at shows until we get it to where we want. It was definitely a more organic process than anything I’ve done before.”

Evolve is much more of a band record than Nothing Comes Easy. Since that album’s release, Simone has performed extensively with her ace young group, one she affectionately dubs Those Guys. They comprise bassist Mark Wilson, guitarist Dave Kirby, saxophonist Brian Dhari, and drummer George Nikolov (former member Anthony Brancati plays keyboards on Evolve). “Having a band involved now has completely changed the whole dynamic of what I do, and they’re all over the new record,” Andria says. “I believe that gives this album much more character.”

In fact, her admiration for Those Guys was the spark to ignite the fiery and sexy “Burn Me Baby,” the first song she wrote for the album. “I wrote that one about the band, to show them my appreciation and respect for what they’ve done for me, helping me evolve through this whole process,” she explains.

With the exception of an adventurous and sizzling re-make of Cream classic “Sunshine Of Your Love” and “Nothing Comes Easy” (co-written by Simone, Kavanagh and Gountounas), all of the songs on Evolve are co-writes by Simone and Kavanagh. The material defies pigeonholing, moving seamlessly through soul, rock, r ‘n b, funk, blues, jazz and even a touch of reggae. If pressed for a definition, Andria calls it “a funkadelic blues jazz fusion.”

This refreshing eclecticism comes naturally, she says. “Greg, I, and every person in the band like different styles of music. George is into rock, Dave loves jazz and ’90s indie rock, Mark loves pop, r ‘n b and soul, Brian loves jazz, and Anthony was more of a funk guy. I’m a blues and psychedelic rock kinda girl. If you can get approval from every person involved on a song then we know we are hitting all the bases. Moving forward, that means we can get into blues, jazz, rock and pop fests, and I’m super pumped about that.”

Lyrically, Evolve also demonstrates a real progression from the debut. “My real voice is being expressed more here,” Andria notes. “It is philosophical and deeper in thought. I’m trying to provoke thoughts in other people, but without being preachy. The first album was personal and it dealt with heartbreak, but here I’m a lot more open to love. I want my music to help make a positive change. The point of music is to inspire.” That belief is reflected in tracks like “Beautiful Life,” “Groove Doctor,” and “Love Me,” a reggae-tinged tune with a universal message of love.

The first single, “Beautiful Life” boasts great dynamic range, sparkling musicianship, and neo-gospel massed backing vocals that drive home the song’s potent lyrical message. Inspired by reflections upon a death in the family and turbulent recent events in her family’s ancestral home of Ukraine, it is not, Andria stresses, “a song about materialism. It is about people standing up for the right to live a beautiful life in terms of being free, as in Ukraine. To me, a beautiful life is not based on what you buy. It’s about family, friends and love.”

Andria Simone’s talent as a vocalist has never been in question. More a force of nature than an instrument, it’s a voice that can send shivers up your spine while tugging at your heart. Her role models are such powerhouse singers as Janis Joplin, Tina Turner, Nina Simone, Aretha Franklin, Etta James and Amy Winehouse, and she does them proud on Evolve.

She is not a conventional 12-bar blues singer, but she can certainly excel in that format. That was vividly demonstrated recently when she participated in the famed Women’s Blues Revue at Toronto’s historic Massey Hall. Sharing the spotlight alongside such veterans as Shakura S’Aida, Divine Brown and Lori Yates, she dazzled with killer versions of tunes by Etta, Janis and Little Walter, earning a standing ovation.

That was just one performance highlight of many Andria Simone has experienced over the past 18 months. Word that this is a live act not to be missed has spread like wildfire on the Toronto scene, leading to regular sold-out gigs at such major live music venues as Hugh’s Room, Drake Underground and 3030.

One memorable 2013 experience came when Andria was invited to be part of the prestigious TEDx series at Waterloo, ON. She spoke to the youth attendees there (“my theme was courage, and being fearless in what you do,” Andria recalls), prior to delivering another knockout performance for the adult audience.

Andria has rapidly made the move up to major music festivals without skipping a beat. She has made converts and sold huge numbers of CDs via electrifying performances at such GTA events as the Beaches Jazz Festival, Toronto Beer Festival and The Southside Shuffle.

Even more excitingly, she has now earned committed fans across the Atlantic. In June 2014, Andria Simone and Those Guys won the Hennessy Talent Quest, a prestigious international competition for new musical talent. The prize? An all-expenses paid week in Cognac, France, during which the band performed several shows at the Blues Passion Festival, a star-studded fest that featured such names as Robert Plant. George Benson and Lily Allen. Simone opened for major French soul star Ben l’Oncle Soul as well as playing their own headline show. And, yes, Andria and the lads happily enjoyed sampling the sponsor’s products!

Proving that success was no fluke, in October Andria Simone and Those Guys were chosen to be a major part of the 6th Annual Lancaster (UK) Music Festival in the U.K.. They performed a marathon seven shows in six days, including playing a concert at Lancaster Castle and headlining the closing night show (they’ve already been invited back for 2015!). This music does – and will- travel exceptionally well, and Andria is itching to hit the road to perform her new material with her hot band.

Simone’s commitment to her music is total. “I didn’t know what to expect when I got into this. I just love music, and thank god I’ve been trusting my instincts because I’m on the right track now. I’m not going to be chasing trends or jumping on a bandwagon. I want to drive the bus, not chase it!”

Following the evolution of this vibrant artist is sure to be a thrilling pursuit.

Check out Andria’s YouTube page for her latest music videos: www.youtube.com/user/andriamusic and at www.andriasimone.com